Keith Tuck owns and operates a commercial cow-calf operation in an all grass production system.

He typically carries 100 cow-calf pairs and develops about 15-20 replacement heifers. The farm is located just north of Smith Mountain Lake in Moneta, VA, in southern Bedford County. Historically this had been a tobacco farm and about 20 years ago most of the fields were planted into cool season forages for pasture and hay as the farm transitioned to mainly cattle production.

Until 2019 all the pasture acres had been in cool season perennial forages like fescue and orchardgrass with some clovers and the natural mix of other grasses and forbs often found in Virginia. 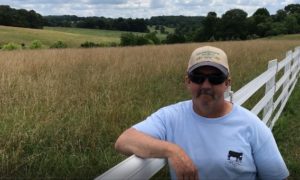 Even though Keith has an established grazing system and has made many improvements to his management, the main challenge is from the hot, dry weather of the summer resulting in a slump in forage production. This greatly reduces the carrying capacity of pastureland and is a common challenge across much of Virginia.

Instead of having to feed excessive amounts of hay to get through the natural summer forage slump, Keith chose to look for a way to meet the needs of his livestock during the summer. Working with the Natural Resources Conservation Service, Keith planned to improve his forage system by transitioning some acres to productive warm season perennials to balance the seasonal production of forage through the summer months. Switchgrass, a native warm season perennial with high production potential from late May through August, will be planted in the first transition field of 16 acres. To help with this transition Keith applied for and was approved for financial assistance through the Working Lands for Wildlife Program.

The field selected for transition had been in orchardgrass and used primarily for spring hay then fall grazing. The stand was getting thin and playing out so was a good candidate for renovation. The field was sprayed with 2 quarts of Roundup in May of 2018 and then planted to a mixture of sunn hemp and pearl millet for grazing. After the summer season the field was left to fallow over the winter going into 2019. In early spring of 2019, the field was sprayed again with Roundup at 2 quarts per acre and planted to ‘Carthage’ switchgrass at a target rate of 8 lbs. pure live seed (PLS) per acre on March 30, 2019.   No fertilizer was applied at planting in order to prevent unwanted seedling competition. 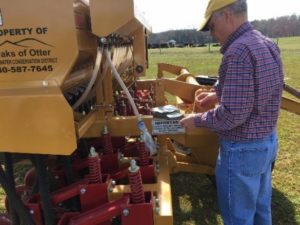 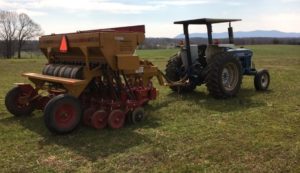 “I waited patiently watching for the seedlings to emerge and after 4 weeks I was getting worried, nothing was coming up. By 6-7 weeks after planting I really started seeing it coming up in the drill rows”, said Keith.   On June 7th, (10 weeks after planting), we closely evaluated the stand and confirmed we had approximately 85% germination which is excellent for native warm season grasses. At this time the crabgrass and foxtail were really starting to get thick, but the switchgrass had a good start and we thought it would grow and stay ahead of the competition. 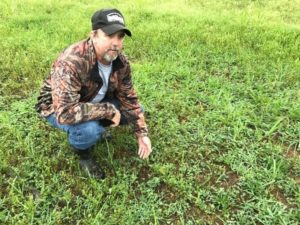 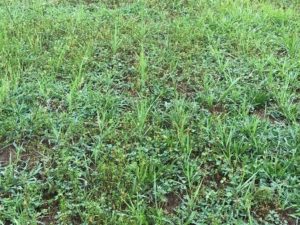 By July, the weather turned hot and dry and the top growth on the seedling switchgrass stopped. Any available energy was put into root development of this native perennial. In contrast the summer annual weedy grasses like crabgrass and foxtail began to go to seed. The typical summer dry spell turned into a very extended drought. The hot and dry weather continued until late October before the drought broke and we finally got a substantial rain.

As the summer went along the crabgrass and foxtail became extremely aggressive and grew taller than the switchgrass seedlings. By mid-August, we decided to bush hog the pasture at 12-15 inches to allow light back to the switchgrass seedlings for the rest of the season. From there it grew for 2 more months and on November 2, 2019 we finally got a killing frost. There was no grazing harvest during the establishment year growing season because the switchgrass seedlings need all the energy to go towards setting a deep root system to get it off to a productive start the next year. 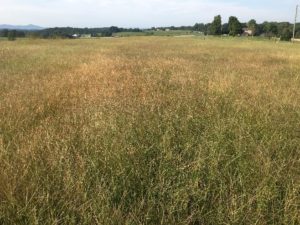 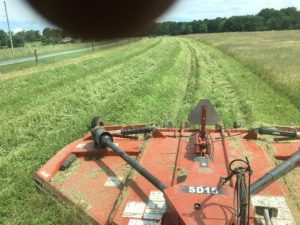 The late summer and fall had been so dry there was no stockpiling fescue for winter grazing. In typical years, Keith can stretch grazing of stockpiled fescue well into winter, but this year feed was short. Watching the weather and field conditions from August through October Keith made some wise decisions.

Now the switchgrass, crabgrass and foxtail are completely frost killed it provides a lot of standing dry matter. During times like this the cows can graze that dry matter as long as they have a feed supplement to get the energy and protein they need to balance the high fiber plant residue. Keith purchased high quality peanut hay and made that available to balance the energy and protein requirements and meet the needs of the livestock while utilizing the residue from the switchgrass and grassy weeds during the establishment year. 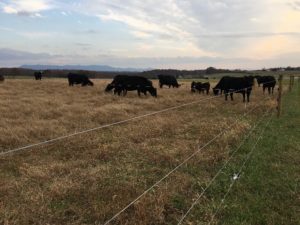 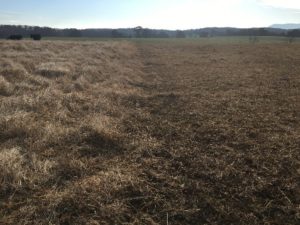 Figure 10: Not enough residue left to conduct a prescribed burn

We anxiously await spring green-up and growth of this switchgrass field in 2020 to provide summer grazing when the herd really needs the forage. Next spring Keith is scheduled to plant a second pasture to a big bluestem, Indiangrass and little bluestem mix for more summer forage production. Stay tuned for an update!