While tall fescue (Schedonorous arundinaceus) is the predominant forage species in Virginia pasture systems, the species has limited productivity during the summer months. In addition, most of the tall fescue in Virginia is infected with an endophyte that produces ergot alkaloids. These alkaloids can be toxic to livestock and induce vasoconstriction in cattle, which reduces their ability to regulate their body temperature. As a result, many livestock in Virginia experience severe heat stress during the summer months, resulting in impaired productivity and welfare. These stressed livestock often seek relief from heat within sensitive woodlands, surface waters and riparian areas; thus, toxic tall fescue is at least partially responsible for woodland degradation and water impairment. Toxic endophyte infected tall fescue also causes reproductive issues in pregnant mares including retained placentas, dystocia, and agalactia.

Tall fescue also forms a dense sod, which is unconducive to travel by ground nesting birds, such as the bobwhite quail. A lack of appropriate habitat has been cited as almost entirely responsible for the rapid decline in bobwhite quail numbers across the state. 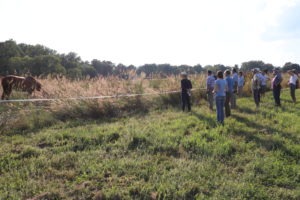 Unlike cool-season grasses, which grow predominately in the spring and fall, warm-season grasses are most productive during summer months and have the potential to fill a large forage production gap in the southeastern US, known as the “summer slump.” Native warm season grasses (NWSG) are well-adapted to this region’s climate and soils, maintaining high productivity even in the summer months and with minimal inputs, in part because their roots can exploit water resources at greater depths than cool-season grasses. Their deep rooting potential also has value for carbon sequestration.

In addition to offering these production benefits and ecosystem services, NWSG have an important role to play in wildlife conservation. The robust, upright form and open space between plants in a NWSG stand provides the type of habitat required for foraging and nesting by bobwhite quail and other ground nesting birds. These grasses shelter small mammals and birds from predators, even after heavy snow events when left standing overwinter.

NWSG grasses can provide food for livestock and wildlife alike. Under proper management, NWSG provide highly nutritious forage and can persist in pastures indefinitely. Unfortunately, their adoption has been minimal. Lack of familiarity, historic challenges with establishment, and misperceptions and uncertainty surrounding nutritional quality and stand management largely account for farmer reluctance to adopt NWSG in Virginia. We intend to address these issues through demonstrations and outreach efforts; a central goal of this partnership between the Natural Resources Conservation Service, Virginia Cooperative Extension, and the Virginia Forage and Grassland Council involves disseminating documentation of producers’ real-world conversion experiences.

This project is funded in part by a USDA-NRCS Conservation Innovation Grant.

Check out the VFGC events page for more information on upcoming events related to this and other projects.

There will be a Warm Season Grasses Pasture Walk on[...] 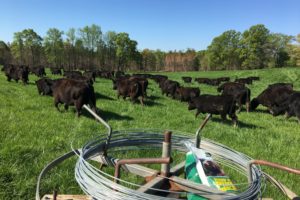 Join us for a late afternoon pasture walk on the[...]